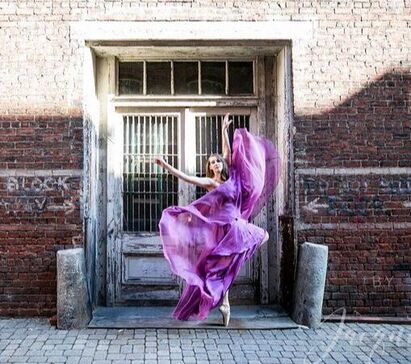 Megan Tatum was born in Chester, Virginia, and her parents quickly learned that she was a very hyperactive child. She began dancing at age 3 and found her independent spirit.  Megan trained under the Royal Academy of Dance syllabus at the Chesterfield School of Ballet and then went on to the University of North Carolina School for the Arts and the School of Richmond Ballet. She graduated from Appomattox Regional Governor's School for the Arts and Technology in 2011 as a dance major with a focus in modern dance choreography and performance.

Megan moved to Williamsburg, Virginia to study at the College of William and Mary thinking that dance was a fun hobby which was now behind her. She started down the Pre-Med track but realized how much she loved musical theatre. Megan designed a major in Integration of Dance, Music, and Theatre Performance with a double major in Kinesiology and Health Sciences with a concentration in Health Sciences Pre-Physical Therapy.

​She began performing professionally while in college as the dance swing at Busch Gardens as well as performing with companies such as Olney Theate Center, Virginia Repertory Theatre, Barter Theatre, Mill Mountain Theatre, Midtown Arts Center, Virginia Musical Theatre, Riverside Dinner Theatre, and Alluvion Stage Company. When not performing, Megan has worked with many physical therapy companies that work with the major Broadway and ballet companies such as the New York City Ballet and American Ballet Theatre even having gone backstage on shows such as Matilda and Wicked.

Megan has been blessed with so many amazing opportunities and looks forward to what the future holds.  She strives to share her passion for performance with all of you. Megan can't wait for the adventures to come and everything she will learn along the way!